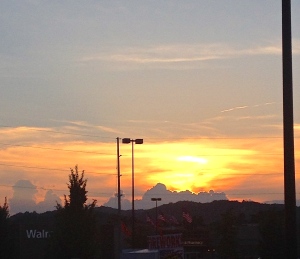 You know that saying that goes, “hind-sight is always 20/20?” Well, it’s true. You also know that phrase that goes, “You don’t know what you have until it’s gone?” (It’s a total oxymoron, but whatever) Well, it’s also true.

As June has now come to a close, those two phrases seem to hold a weight that they didn’t before. I’m ending the first summer chapter of 2014, and entering the second. It’s really bittersweet, kind of like sunsets. Sunsets are some of the most beautiful scenes I’ve witnessed, but it depends on how you look at them. Sometimes, the vibrant colors are paired with the close of a day you can’t wait to end. Other times, their paired with a day you wish could go on forever. As the sun sets on June and rises in July, I’m tired. My heart is full and my mind is filled with wonderful memories, but lethargy is real. I  want nothing more than to sleep, maybe sit in the sun, watch Netflix, and get lost in a good book–not in that order, nor simultaneously, but all of those things sound enchanting. However, Responsibility calls. And at 20 years old, when the BIG “R” yells your name, you can’t ignore it. Well, you can’t ignore it for long…

So, as I take my first step into July, I’ve chosen to  do the “Responsible” thing and reflect on lessons learned over the past 4 weeks.
And so here it is–6 Things I Learned int he 6th Month:

1) Getting up early is worth it
I am not a morning person, nor do I ever think that I will be one. I don’t think I’ve ever woken up and immediately thought, “Yeah! It’s morning. Let’s get this day rolling!” I wish that was my thought, but alas, mornings and I are just not compatible. It takes me about an hour to fully wake up and be pleasant enough to encounter other people. That being said, I should logically give myself at least an hour to get ready every morning, right? Ya know, enough time to brush my teeth, do my hair, have some coffee, etc. But no. I way too often give myself 30 minutes. It’s enough time to “get ready,” but not enough time to “wake up.”
I don’t know what it is about me that thinks 15-30 more minutes of sleep is going to make a difference, it never does. I have ALWAYS felt 100% better when I get up the first time my alarm goes off. Starting off your morning right really can affect the mood of your day, especially the first few hours of it. So, get out of bed the first time! Give yourself more time than you need to get ready. Use those extra minutes to sit and mentally prepare for the day. Read a bit. Listen to music. Drink your coffee slowly, and then make an extra cup for the road. It’s worth it.

2) Exercise, then nap
Being active has become a really important thing in today’s society. I think a lot of people assume that in order for a work out to really count, you have to run all the miles and lift all of the weights. Wrong. You can go for a walk or leisurely jog–that’s still better than sitting on the couch all day. However, after a long day of work, sometimes all you want to do is nap. And holla praise for nap time! But every single time I have chosen to go for a run instead of taking a nap, I’ve immediately felt better. I feel better over all, and I’m more alert. If there’s still time, by all means…nap! But try exercising first–your body will thank you later.

3) Give people a chance
People are going to make mistakes. Because of this, people are going to hurt and disappoint you. It’s just how life is.  But you’ve gotta allow people to mess up every once in a while–forgiveness is a wonderful thing. I’ve learned that you can’t write people off right away. First impressions are extremely important, but I wish they didn’t hold as much weight as we put on them. Very few times has my immediate first impression of someone been exactly how they actually end up being. I’ve learned that although people will disappoint you, they will also often surprise you, for the better! But you can’t be so closed off and set in your ways that you’re unwilling to have the lights flipped on and then showered with balloons and cake as the crowd  behind the couch yells, “SURPRISE!”

4) Forgive yourself
Just like the rest of the world, you’re going to mess up too. The only problem is the fact that you hold yourself  to a higher standard than you do the rest of the world, whether you realize it or not. That’s why it often hurts so deeply when people disappoint us–we can’t image in ourselves being audacious enough to hurt someone else like that. But the fact of the matter is that we are audacious enough to hurt someone else like that. And when that happens, we have to allow ourselves to accept that we’ve messed up, learn from it, and move on. I’ve made my share of mistakes this summer and I do wish that I had sometimes chosen to react differently than I did. But if I continue to dwell on what already happened and refuse to live in the present, striving for the future, how will I get anywhere? How will I grow? Like my good friend, Sara Bareilles, says “Compare where you are to where you wanna be and you’ll get nowhere.” If where you are is in the midsts of a mistake, don’t sit there. Don’t think about change…change!

5) Friendship (new and old) is a beautiful thing
I’ve talked about friendship a lot, but that’s because I think it’s so important. Coming into the summer, I had the mindset of flourishing the friendships I’d already established. And that happened, I did grow closer to people I already knew, but I gained friends that I didn’t expect. I also became friends with people that I used to consider acquaintances. You’re never too old to make a new friend. You’re never too old to invest in someone. You’re never too old to have someone invest in you. Even if it’s for a short time, let it happen. Enjoy it while it’s here and then remember it fondly if it leaves.

6) Go ahead, ‘YOLO!’
I know that YOLO isn’t a verb, but I’m going to use it as one. Sometimes, it’s extremely important to play it safe. Other times, it’s totally okay to impulsively act and do something that you probably would not have done had you sat down to REALLY think about it (Like drive from Boone, NC to Atlanta, GA at 1am to pick up a friend in need). But you see, I think both situations call for wisdom. It takes wisdom to know when you should meticulously think things through and “play it safe,” but it also takes wisdom to know when it’s okay to be spontaneous, because sometimes being spontaneous it the right thing to do. Each decision requires some form thought. But the key is wisdom. You can totally YOLO with wisdom. YOLOing doesn’t mean doing something extremely stupid because you’re young. YOLOing is taking chances, seizing opportunities, and taking advantage of situations presented to you while you’re young that may not be available to you when you get older. But again, the key is wisdom. My point is this, don’t let fear cripple you. If there’s one thing that I’ve learned, and continued to learn, it’s that fear governs too many decisions. I, for one, do not want to live under that rule. I am not a slave to “being scared.”

So month number 7, I’m ready for ya. Let’s do this, July!
[Jesus, thanks for the lessons I lean red in June. May I look to You and continue to learn even more as the summer progresses.. Help me to find joy in the ordinary.]
❤ Amen